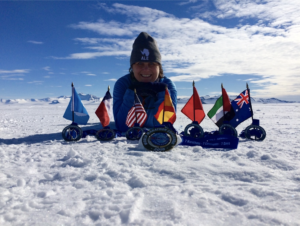 Sarah Adler Ames was born and raised in Heidelberg, Germany.  She was one of the first recipients of a US Congress-German Bundestag scholarships which brought her to live with a wonderful host family in Versailles, Kentucky for a high school year.  Reluctantly she returned to Germany after a year in the US and eventually started studying at the University of Hamburg School of Law in Hamburg, Germany.  While in law school, her American host family relocated to Montgomery, Alabama, which is how Sarah ended up visiting Alabama a few times.  Inspired by an internship with the Capell Howard law firm in Montgomery and southern hospitality, she decided to enroll at the University of Alabama where she earned a Master’s degree and a law degree. Upon earning her J.D., Sarah relocated to Chicago but continued to maintain close ties to family and friends in Alabama. Sarah is a partner at Quarles & Brady LLP, a national law firm, and represents foreign companies and their U.S. subsidiaries with regard to corporate, employment and immigration matters.

Travelling always played a big role in Sarah’s life and it did not end when she traded in her student id for a business card.  Sarah travelled to every continent 5 times or more, stood at the North Pole twice, kayaked around penguins and whales in Antarctica, travelled for two weeks with Inuit hunters on dog sleds off the coast of northern Greenland and treaded lightly among the famous red crabs on Christmas Island and the moai statutes on Easter Island. Many of her trips were planned around a marathon and according to available records Sarah is the first female to run marathons on all 7 continents 3, 4 and 5 times.  The last time Sarah ran a marathon on all 7 continents, she decided to up the ante and complete the feat in 168 hours or 7 days in support of the Hamlin Fistula Hospital in Ethiopia. The hospital provides free surgeries for woman with horrific birth injuries. If a woman could go through unassisted, obstructed labor for 6 days, running a few hours a day and sitting back in an airline seat the rest of the day hardly sounded like a challenge. For her presentation, she will take us along on her 7-day adventure running around the world, but no worries, there will be no running, no jetlag and no quarantine for the audience.